What’s in this post: Overview of figs, including origin and nutrition. Fig stats and a fig-tastic festival in Ocracoke, NC. Mark your calendars for next year’s event on August 7-8, 2020.

How do you like your figs? My personal favorite is spreading the syrup from fig preserves on homemade biscuits. They’ve also become a favorite in our annual glögg making as well as in cakes (ever since I found this Southern Cakes cookbook from Nancie McDermott). 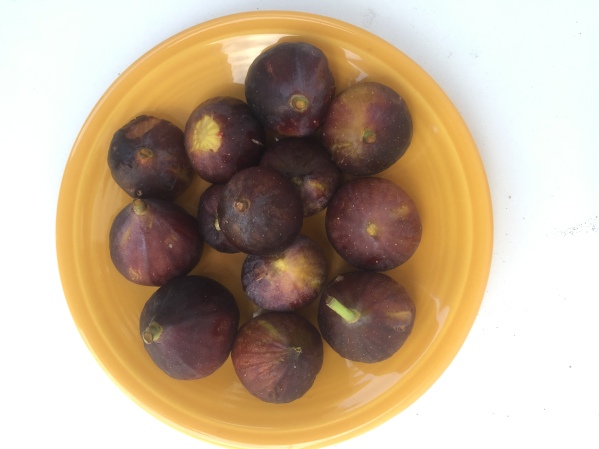 Since I read The Month of Their Ripening, by Georgeann Eubanks, I’ve found myself looking for excuses to visit the places she mentions in the book. This weekend, we’re headed to Ocracoke – home of the Fig Festival – celebrating the history and heritage of the island, while highlighting the dozen plus varieties of figs found on the short 16-mile strip of land of the coast of North Carolina. 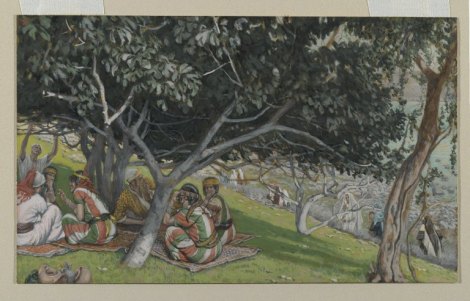 Figs are one of the oldest known foods to be intentionally produced–their agricultural history dates back more than 10,000 years ago in Western Asia. They’re even mentioned in the Old Testament and Talmud. The first ones in the US were reportedly brought by missionaries to California in the 1760s and are now the eponymously known as mission fig variety. Thirty years later, figs were reported on Ocracoke.

There are over 700 listed varietals of figs, and though they prefer a temperate climate like that of North Carolina, they will also tolerate warmer and colder conditions. Most  start producing after 3 to 5 years and will continue to produce well for up to 15 years. Edible figs (Ficus caricus) are part of the large mulberry family. Similarly unfussy to soil type, they perform well in a variety of soils, including light sand, rich loam, heavy clay or limestone, when they have sufficient depth and drainage. [1]

Almost the same as peaches, a 100 gram serving of raw figs has about 70 calories and 3 grams of fiber. It’s also a good source of manganese and other natural health promoting compounds. If you’re lucky enough to find a tree for picking figs, be careful –  the latex in the leaves and stems are skin irritants, especially when combined with sun exposure.

2017 Fresh Fig Production by weight and by Country, dataset from FAOStat

Like with peaches, the home of the fruit is also the most productive. Western Asian countries and Northern Africa are the most prolific producers of figs in the world. Exports in 2016 were led by the largest producer, including Turkey, followed by Afghanistan for dried figs. Interestingly, the third largest export of fresh figs is Austria, a non-producer. It would appear they are a way-point or processing point from other producing countries – their exports (4,819 mt) of fresh figs were only 1,200 tons less than imports (6,054 mt). [2] 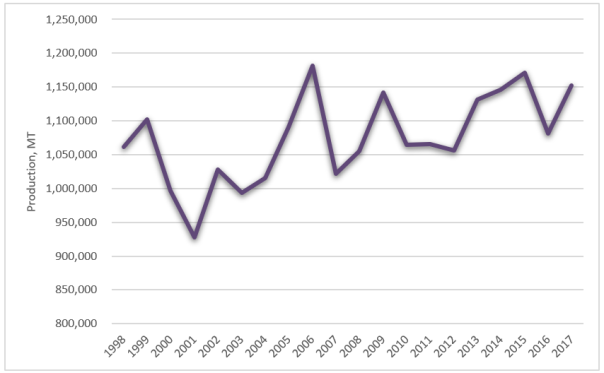 In the US, production is dominated once again by California, where 98 percent of US production is found. Though acreage has been falling, yield has steadily risen, keeping production relatively stable at just over 60 million pounds in the past years. Production peaked in early 1990s at over 120 million pounds. Figs have a very short shelf life–less than a week–and don’t ripen off the tree. Unsurprisingly, the majority of California’s harvest is processed rather than sold fresh (87% in 2018) to be processed.  [3] 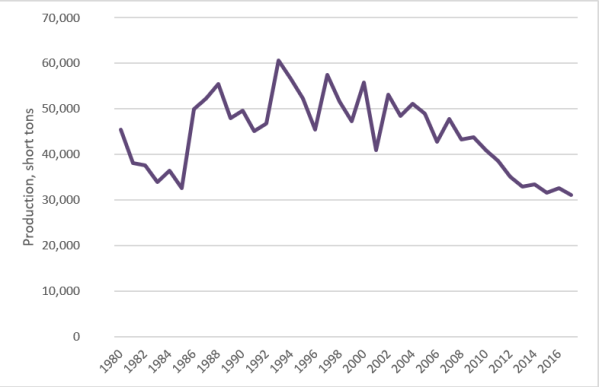 Figs have a long history on the island of Ocracoke, one of the boundary islands of North Carolina. Margaret Garrish of Ocracoke was credited with creating the iconic Ocracoke Fig Cake when she found herself short of dates for her cake and substituted preserved figs.

In 2014, the annual fig cake contest slated for Independence Day was held instead in August, due to Hurricane Arthur’s untimely visit. Since then, the fig festival has been held in August, put on by the Ocracoke Preservation Society. You can hear from Chester Lynn, who recently published a booklet about figs and Ocracoke, taste fig preserves and cakes, and dance, among other events. Learn about varieties with beautiful names like Blanche Howard and celeste.

I’m excited to try out the fig dishes put together from local restaurants at the reception on Friday – I just hope we have enough time left for tasting preserves and dancing, too! 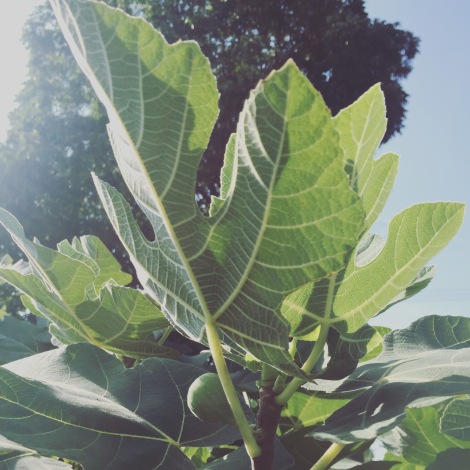 Green (unripe) fig and leaves in the public permaculture garden in Greensboro, NC.

Where else to find them:

Go now and good luck! This ephemeral fresh fruit is only available a short while at markets in NC, though you can find the dried ones year round in most groceries. If you can’t make it to the Fig Festival on Ocracoke, you should be able to find some farmers at the local markets with them this weekend, the 17th of August 2019. At the Greensboro Farmer’s Curb Market, check-in with Shirley, the flower lady.

Mark your calendars – next year’s Ocracoke Fig Festival will be August 7-8, 2020. Oranizer Sundae Horn says moving it up a weekend will help ensure you get to taste more varieties–yum!

“The US island that speaks Elizabethan English” BBC

Outerbanks This Week, here and here

Our State magazine, here and here 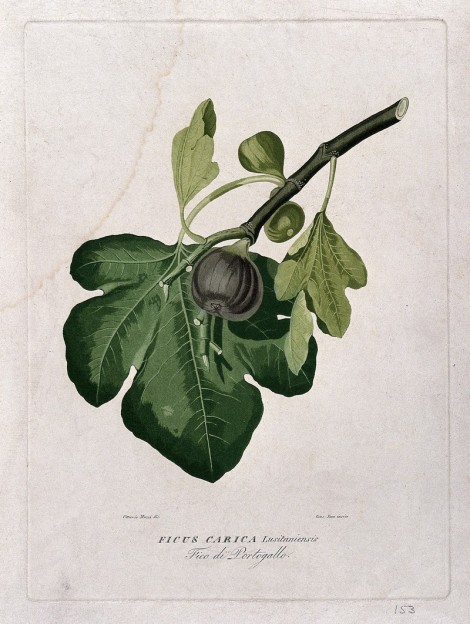