In my family, all of the adults had what I now understand is a different definition of the meaning of “leisure time” and “fun” from other adults.  How else can you explain the 10 acre “garden” that my dad would keep on weekends and evenings after a 2 to 3 hour roundtrip commute each day into some part of Houston?  And he wasn’t trying to get some exercise after working a desk job – he was a road construction superintendent.

Given this family predisposition, it isn’t too much of a surprise that when my uncle retired from working at a chemical factory on the south side of Houston in 1995, he and my Aunt Joyce started “gardening” almost full-time.  They grow a little bit of everything nowadays, and in the past they have grown purple hulls to cantaloupes and everything in between.  Some of their mainstays are potatoes, tomatoes and squash.

Farming goes back a ways on both sides – there’s always been somebody growing and selling something that comes from the soil. Most of my aunts and uncles tell stories about picking cotton in the bottom[1] for my Uncle Willie. My grandparents, Edith and Ivy Tullos, were known in Ace, Texas, and thereabouts as the folks with the big red arrow sign pointing the way to fresh vegetables up the hill. They farmed a few acres and sold it onsite. What they didn’t sell my grandmother canned or gave away to family and friends. Turns out my Uncle Richard and Aunt Joyce were the ones who made that sign for them.

The previous generation are also the ones who likely provided the most knowledge about growing food to my aunt and uncle.  Between what they learned growing up and what they learned from their home garden when they lived in Danbury, they were prepared for all of the trial and error that goes with growing vegetables.  They also give credit to good old-fashioned word of mouth.

That knowledge also guides what they choose to grow.  With age comes wisdom, and they target varieties that are easy to pick and ripen quickly.  They also try to select varieties that aren’t too tasty to animals. Uncle Richard explained the logic this way, “The longer things stay in the ground the more things can happen to it.  And most of them aren’t good.” From blight, to insects, to hurricanes and to deer and hogs marching through the fields, the threats are many in East Texas. That’s why they like to grow the “early” varieties of their favorites, such as Early Bush Goliath tomatoes. It ripens in 56 days, compared to the normal 70. Aunt Joyce is a fan of the compact size of the plant, as opposed to the wilder tomato vines that can sprawl 8 feet or more in any direction. 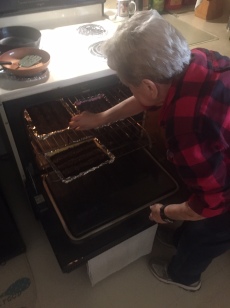 Aunt Joyce with her tray babies

Why they do it

Besides the fact that one of them has a unique way of thinking about “fun” and “leisure” (or as my aunt quipped with a chuckle, “He’s crazy”), both agreed they like growing and selling vegetables because it gives them good exercise and an excuse to be outside. Having fresh foods for their kitchen makes the work deeply gratifying. Uncle Richard also enjoys the excuse the market days give him for visiting with folks; he was the president of the local farmers market for over ten years. He recently received an award for his involvement and for farming.

When I asked them about the future, they both said they were cutting back due to their age. “We only planted a hundred pounds of potatoes this year.” Still sounds like that’s plenty of fun, by Tullos standards.

Where to find them

[1] What we call the land near the Trinity River. It’s called “the bottom” because it’s at the bottom of the hill. It’s also in the flood plain and has rich soil as a consequence of the alluvial soil deposited over the millenia.