Reading time: 3 minutes 53 seconds
Takeaway: Generally, women farmers are underrepresented in the number of farmers in the U.S. and lack access to resources in other parts of the world. Research for this post has left me with many more questions than answers.

An aside, to begin: I’ve been less than regular about posting here the last couple of years, partly because of “real work” and partly because I’ve been questioning the worthiness of this endeavor. Are these posts just adding to the internet static? Is this a good use of my spare time? What’s my point, anyway? After all this existential angst, I’ve concluded that as we humans often do, I’m overthinking it. I enjoy both the research and the writing; so why not? I’ll continue, and I’ll be expanding to incorporate more of my interests, which will sometimes take the posts outside the North Carolina Piedmont—even outside the U.S.

Despite the numbers you may have seen characterizing the role of women in agriculture around the world with any certainty is difficult. Indeed, an entire paper was written about the myths of women in agriculture that have been perpetuated over the past decades. “Overgeneralization undermines policy relevance and planning.” While this is true for policy and planning, how about broad generalizations or interesting information for the generally curious?

A paper for the 2011 FAO State of Farming and Agriculture has the following gleanings:

-43% of the agricultural labor force is female.

-the labor burden of rural women is greater than that of men and includes a higher proportion of unpaid household work like food preparation, and water and fuel gathering. Consequently, women’s time compensates for poor infrastructure in some countries, e.g. due to poor water and energy infrastructure, women spend their time gathering water and fuel wood.

-most food is produced with collaboratively, with the cooperation of women and men at different points in the growing cycle.

-while women may not be found to benefit from contract farming, they do seem to be benefiting from packing and export operations in poor rural areas.

As of 2007, women were the principal operators on 14% of farms in the U.S., up from only 5% in 1978, the first year the gender of the farm operators was queried on the U.S. Census of Agriculture. Women, typically farm wives, comprise 96% of secondary operators; adding the primary and secondary operators brings the total female operators up to 30% of the total. Eighty percent of these farms conduct less than $10,000 in sales each year, compared to 60% of male owned farms.[1] 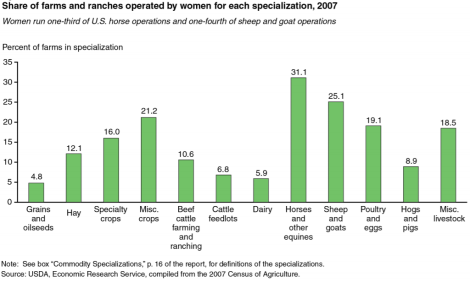 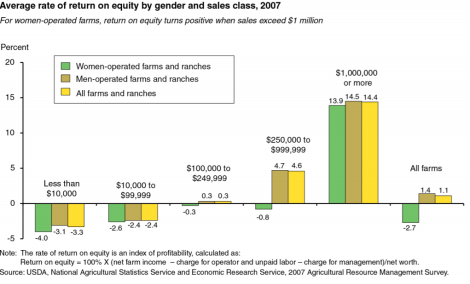 The miscellaneous category is comprised mainly (98%) with farms that reported no sales. Of those, 85% receive government payments like land retirement programs such as the Conservation Reserve or Wildlife Reserve Programs. To characterize these farmers in plain English, most of these are retired widows who continue to own the land that their husband used to farm. Despite no sales, the land is considered agriculture because of their enrollment in the programs listed above.

(Above information was sourced from Hoppe, Robert A. and Penni Korb. Characteristics of Women Farm Operators and Their Farms. EIB-111, U.S. Department of Agriculture, Economic Research Service, April 2013.)

Questions with no answers…

Overall, this has been a unsatisfactory post. I didn’t think the numbers would be quite this skewed. I’ve been left with many more questions than answers, some of which are unanswerable, verging on philosophy or worthy of a doctoral dissertation.

Why aren’t there more female farmers in the U.S.? Why do their farms have such small sales? The data indicates that most of these women have off-farm jobs that comprise their primary income streams. Are these farms, much like this blog, something they do because they find it fulfilling? Why don’t we make more money at it since the two aren’t mutually exclusive? Is it that we find the other benefits to be as or more rewarding than money or do we just lack the skillset to monetize our work?

And finally, if a small cow-calf operation, a thousand unplanted acres in the conservation reserve program, and buildings filled with thousands of chickens are all “farms”…just what IS a farmer?

The idea for this post came freely enough, “March is Women’s History Month; I’ll focus on females and agriculture,” I thought. Quickly followed by, “Yes, and then what? What’s my message?” After much procrastination, I concluded, that there is none. Scientia ipsa potentia est. (Knowledge itself is power. Francis Bacon, 1597)

Women are underrepresented overall and also have unequal access to resources in agriculture, depending on the location. If we don’t examine the data – if we don’t have the data to even examine – how would we know the causes and implications? Considering the underperformance of agriculture in various areas around the world, the growing need for food, and effects of climate change on productions systems, we need all our farmers to have access to the resources they need. Defining the constraints–if there are any–will allow us to identify the solutions.

Do you know or are you a woman farmer? What are your thoughts on the topic? Feel free to leave a comment.